Blog is moving to http://donnamcampbell.wordpress.com

I'm moving the American Literature Updates site to  http://donnamcampbell.wordpress.com/.  At that site, I plan to post more frequently.

The links to the short stories are now correct: http://public.wsu.edu/~campbelld/wharton/shortstories.htm
Posted by D. Campbell at 4:45 PM No comments:

For decades Willa Cather has been a peculiar enigma in 20th-century American literature: beloved by ordinary readers for vivid evocations of frontier life in novels like “O Pioneers!” and “My Antonia,” but walled off from closer personal scrutiny by some of the tightest archival restrictions this side of J. D. Salinger.
Enlarge This Image 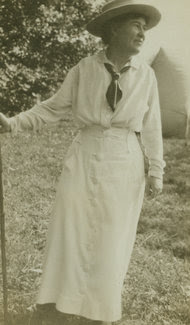 From Scaling Windmills to Literary Editor

Excerpts from “The Selected Letters of Willa Cather,” edited by Andrew Jewell and Janis Stout.
Cather was believed to have destroyed most of her letters and sternly ordered that her surviving correspondence never be published or quoted from, a wish her executors adhered to unbendingly, even as it fueled sometimes rancorous debate about her sexuality.
But next month, nearly seven decades after Cather’s death in 1947, the doors of her interior life will be thrown open with the publication of “The Selected Letters of Willa Cather,” an anthology of 566 of the roughly 3,000 letters that turned out to have survived, scattered in some 75 archives.
For scholars it’s a major literary event, a chance at last to flesh out the understanding of a writer often seen as a remote bluestocking in big skirts and old-fashioned hats. Cather, the letters reveal, was a powerfully engaged literary businesswoman who corresponded with H. L. Mencken, F. Scott Fitzgerald and other notables of the day — and once playfully took those skirts off, as a charming youthful letterrecounts, to clamber down a windmill in a thunderstorm.
The letters do not yield steamy intimate detail. But they do make clear that Cather’s primary emotional attachments were to women, while also laying to rest what the volume’s editors, in interviews, called a persistent urban legend: that of the fanatically secretive author eager to erase any record of shameful desire.
“There’s really no evidence for the idea that she wanted all her letters destroyed,” said Andrew Jewell, an associate professor at the University of Nebraska at Lincoln, who is an editor, with Janis Stout, of the new collection, published by Alfred A. Knopf. “It’s just one of those pieces of gossip that has taken hold in published scholarship.”
Posted by D. Campbell at 9:15 AM No comments:

I'm updating the Timeline and Author pages, getting rid of old links and finding new sources. All the PicoSearch boxes (which didn't work) have now been replaced with Google Search.
Posted by D. Campbell at 11:44 AM No comments:

Updates to 1750 page, Occom bibliography, and other early pages

I've been updating the Timeline page for 1750-1799 and the associated author pages, including Samson Occom; I've added a bibliography for him at http://www.wsu.edu/~campbelld/amlit/occombib.htm.

The new issue of Common-Place has an essay on and a new chapter from Frances E. W. Harper's Sowing and Reaping: http://common-place.org/vol-13/no-01/gardner/

The Moby-Dick Big Read project is now up to "The Spirit-Spout." Visit this site for artwork, audio files, and commentary: http://patell.org/2012/11/moby-dick-big-read-day-51/.

The Charlotte Perkins Gilman page (http://www.wsu.edu/~campbelld/amlit/gilman.html)  has been updated to remove links to the now-locked University of Virginia etext archives.  I will be updating all the pages to eliminate these links.

Ralph Waldo Emerson page has been updated with new and update links. http://www.wsu.edu/~campbelld/amlit/emerson.htm.
Posted by D. Campbell at 7:51 AM No comments: 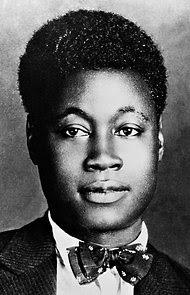 The author Claude McKay in the 1920s.
The manuscript, “Amiable With Big Teeth: A Novel of the Love Affair Between the Communists and the Poor Black Sheep of Harlem,” was discovered in a previously untouched university archive and offers an unusual window on the ideas and events (like Mussolini’s invasion of Ethiopia) that animated Harlem on the cusp of World War II. The two scholars have received permission from the McKay estate to publish the novel, a satire set in 1936, with an introduction about how it was found and its provenance verified.
McKay, a Jamaican-born writer and political activist who died in 1948, at 58 (though some biographies say 57), influenced a generation of black writers, including Langston Hughes. His work includes the 1919 protest poem “If We Must Die,” (quoted by Winston Churchill) and “Harlem Shadows,” a 1922 poetry collection that some critics say ushered in the Harlem Renaissance. He also wrote the 1928 best-selling novel “Home to Harlem.” But his last published fiction during his lifetime was the 1933 novel “Banana Bottom.”
“This is a major discovery,” said Henry Louis Gates Jr., the Harvard University scholar, who was one of three experts called upon to examine the novel and supporting research. “It dramatically expands the canon of novels written by Harlem Renaissance writers and, obviously, novels by Claude McKay.http://www.nytimes.com/2012/09/15/books/harlem-renaissance-novel-by-claude-mckay-is-discovered.html
Posted by D. Campbell at 12:51 PM No comments: